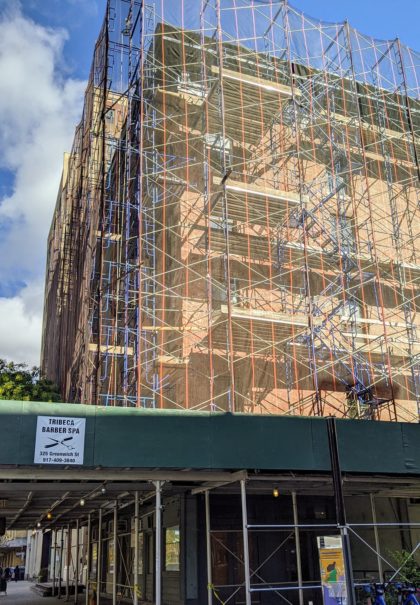 Citizen of Tribeca | The saga behind 325 Greenwich

If I go to a rabbit hole, I take you all with me. So I wish us good luck and I hope James will intervene here.

The new owner of 325 Greenwich, Josh Greenberg, posted a comment on the site, asking for help from the neighborhood in getting Café Clementine through the building ministry clearance process. I waited to post it because I wanted to see what was going on at DOB first – and I was all the more confused. It appears the restaurant’s ability to move forward was stuck on an element of bureaucracy called a “narrative statement” for the Interim Multiple Dwellings in the Loft Law program – of which 325 is a part. (The building has four apartments upstairs.)

As Greenberg said, the DOB was holding the restaurant hostage. The DOB says Greenberg has not been a responsible owner, but a simple walk in the block could tell us otherwise.

Greenberg bought the building in 2019 from Tribeca owner Peter Matera, and since then he has been trying to bring it up to code. The building entered the process of legalization under the Lofts Act in 1983, and during the majority of those four decades few substantial changes were made to the building as no one applied for a permit (there are even an old elevator inside).

As we can all see, he worked and restored the facade (coming soon) and improved the storefronts. According to Greenberg, he paid $ 80,000 in fines from the previous owner’s penalties, and he filed plans to legalize the property, which cost him $ 55,000 in fees.

In order for Cafe Clementine to get its permit, the building needs a “letter of no objection” from the Loft Board, which is part of the DOB.

But DOB says Greenberg hasn’t taken the necessary steps to clean up the bridges for it, even though Greenberg says he’s filed the plans and construction is clearly underway. From the DOB spokesperson: “To date, the owner has not submitted a request for construction work to carry out the necessary repairs inside the building and convert the upper floors into safe and legal apartments… In recent weeks , the Loft Board contacted the owner on several occasions and held an upcoming meeting to discuss the steps to be taken and the progress to be made in obtaining the LONO for the restaurant on the first floor.

Enter the rabbit hole. (And if you really like that sort of thing, I left the regulations stuck below.)

I also wondered why the repairs to the residential units were related to the commercial spaces, and it appears to be the case: “In order to obtain the permit for the proposed construction work to develop the restaurant, the owner must first Loft Board… In order to obtain the LONO, the owner must demonstrate progress towards the legalization of the residential units of the building. Since the current owner bought the property, they haven’t.

In the meantime, it looks like there may be some movement this week after a conference call between Greenberg and DOB officials.

But that brings us back to Café Clémentine.

Clementine’s owner Rosa Tlaseca and her team are strapped for options and funds. Their future there is entirely tied to the Loft Board process and whether Greenberg can make sure everything is resolved and swiftly, especially since all of their other permits are in place (I saw the document with DOB approvals).

“It was all approved and we were like Hallelujah and it happens at the Loft Board and we thought it would be a rubber stamp and now they’re saying no,” Greenberg said. “I am now so angry on behalf of my tenants. It is so beyond their domain and not their business. It’s the last thing the city needs right now, it’s anti-business – and a local business too. They are hard working people. “

(E) Loft Board staff may decline a LONO request for proposed work when:

a. the owner does not have a modification request filed with the DOB to carry out the legalization work in the IMD spaces;

D. the owner’s monthly reports as required in 29 RCNY § 2-01.1 (a) (1) (ii) show no progress of legalization projects in the building. Loft Board staff may complete their review of the Landlord’s monthly reports to review any relevant information contained in the Loft Board records;

e. the IMD building already has a final occupancy certificate, but the owner has not asked the Loft Board to remove it;

F. the owner requested the Loft Board to remove the building in question before filing the LONO application, but the owner did not make all diligent efforts to submit the additional information requested by the Loft Board staff for processing the request for removal; Where

g. any other circumstance indicates to Loft Board staff that the owner has not taken all reasonable and necessary steps to obtain a final occupancy certificate for the residential portions of the IMD spaces in order to legalize the building in question or remove the building of the Competence of the Loft Board.

YESTERDAY AND NOW: The other bus terminal in Barrie