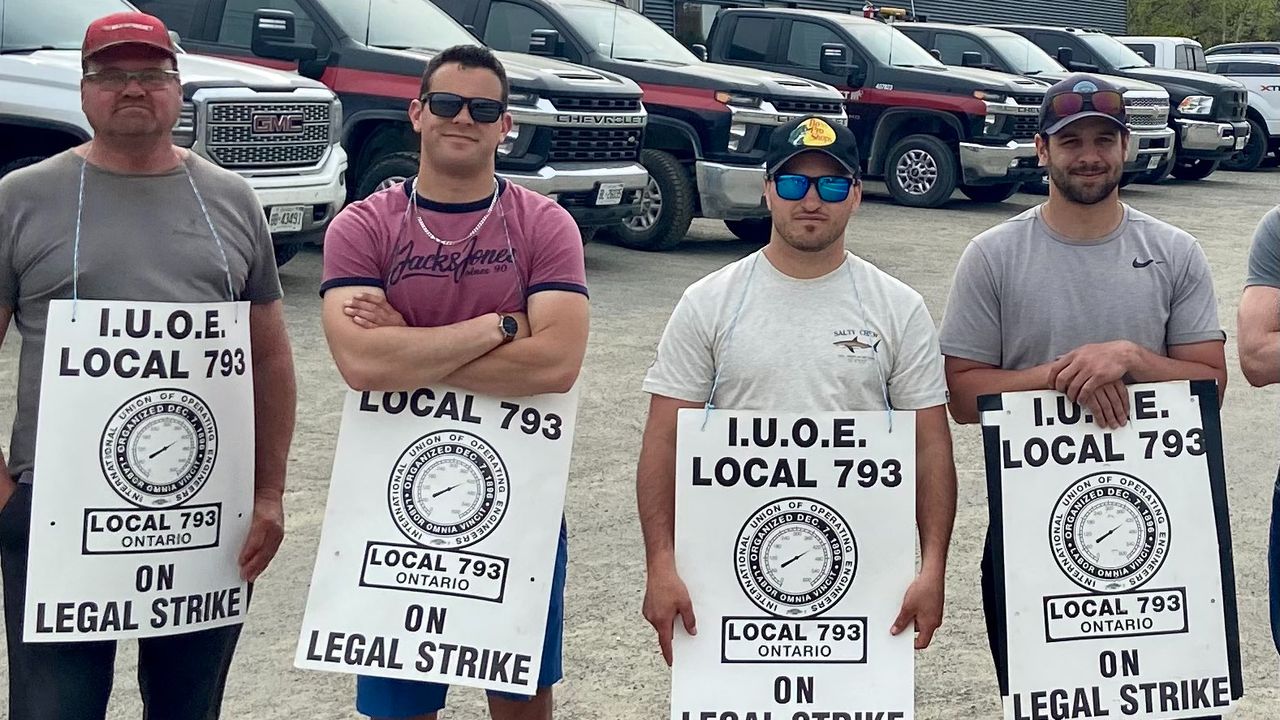 The number of striking construction workers in Ontario has risen to 43,000 this week. Collective agreements for a range of construction trades workers expired on April 30.

About 15,000 frame house builders, flooring layers and skyscraper builders, members of Local 183 of the Workers’ International Union of North America (LiUNA), walked off the job on May 2 to demand wage increases that keep pace with runaway inflation. They were soon joined by 6,000 commercial operations engineers, members of the International Union of Operations Engineers, Local 793, and 7,000 residential and commercial drywall installers.

On Monday May 9, 15,000 carpenters in the Institutional Industrial Commercial Construction (ICI) sector walked off the job, after overwhelmingly rejecting a contract offer that did not match the huge spikes in the cost of living.

The carpenters’ strike developed into open rebellion against the Carpenters District Council of Ontario (CDCO), which recommended a rotten contract offer from the Carpenters’ Employment Bargaining Agency (CEBA). In an angry statement, the CEBA expressed its disbelief that the workers defied the union’s recommendation, saying, “These negotiations have resulted in province-wide settlements that have been accepted by all carpenter locals. , who also recommended these by-laws to their members for ratification.

Even after the Carpenters turned down the deal, which the CDCO refused to publicly stipulate, CDCO Chairman Mike York continued to assert that “nobody wants a strike”. After last-minute talks to avert the walkout broke down, York finally said the carpenters would picket last Monday. Negotiations resumed on Thursday.

On a picket line in Waterloo, union bureaucrats handed workers a leaflet containing a list of vague points. The flyer demanded ‘fairness’ and outlined how construction workers continued to work during the pandemic because Ontario’s Progressive Conservative government gave in to building contractors’ demands that construction workers be considered “essential”. No mention was made of the role of unions in keeping workers on the job, despite the health risks posed by COVID-19.

The flyer also said members were not looking for a “big bonus,” ruling out claims for large wage gains.

What workers are really asking for are wage increases to match inflation and to make up for decades of union-allowed sell-out contracts below inflation. The union’s leaflet alluded to this fact, noting that workers are earning less money today than they did in 2012 for the same work. Needless to say, he failed to explain that the unions were fully complicit in enforcing one concession-filled contract after another.

The roughly 80,000 workforce in Ontario’s homebuilding industry is a powerful section of the working class that could wield enormous economic clout in a real fight for higher wages and better conditions. of work. They work in an industry that has seen booming profits as property developers and speculators have taken advantage of soaring residential and commercial real estate prices. Additionally, the workers’ struggle comes at a time when other sections of workers across North America have also walked out to demand wage increases, including CNH farm equipment workers in Iowa and Wisconsin, nurses in California and grocery warehouse workers in Ontario.

But the struggle of construction workers is crippled by the unions, which have sought to impose separate agreements for each trade in order to divide and weaken the workers.

In February, the International Brotherhood of Electrical Workers (IBEW) imposed a rotten three-year deal containing an 8.6% total wage “increase” for electricians. The ironworkers’ union then imposed a three-year 9% “increase” for its members in March. On an annual basis, these are both well below the current annual inflation rate of 6.7%, leading to a reduction in real wages.

In a comment on social media in response to a previous World Socialist Website article on the strike, a member of Ironworkers Local 721 provided a revealing exposition of how the union bureaucracy engineered the passage of the below-inflation wage deal. The worker wrote: “Our local rejected it to begin with, but the vote was not recognized. Then they voted again while everyone was talking standing up. Nobody heard them, and they said whoever stood up was for a yes, and then the motion passed.

In the meantime, the IUOE has made clear its determination to end the work stoppage for the operations engineers as soon as possible. Mike Gallagher, the “business manager” of IUOE Local 793, said his team was “eager to get back to the table”.

The plumbers and pipe fitters remain in their jobs, despite the rejection of their latest contract offers. Angus Maisonneuve, chair of the provincial bargaining committee with the Ontario Pipe Trades Council, confirmed that workers will not strike during the week of May 9, even though a contract offer was rejected in a vote on May 5. . The only reason Maisonneuve gave for keeping the workers at work was that “meetings were scheduled for this week”, adding “No action at work required, as usual”.

What a bunch of pranksters! On May 5, plumbers and pipe fitters rejected a contract offer that would only raise wages by 12.5% ​​over the next three years, well below the rate of inflation.

Construction unions are fiercely hostile to leading a unified fight by construction workers for better wages and conditions, as they know full well that such a move could trigger a broader mobilization of workers facing the same issues. in education, healthcare, manufacturing and other sectors. . It’s a scenario the union bureaucracy wants to avoid at all costs, especially in the midst of a provincial election campaign where neither party has anything to offer the working class.

LiUNA and the Boilermakers Union have openly declared their support for far-right Premier Doug Ford, while some of the other construction unions will support a “progressive” vote for the Liberals or the NDP, two parties determined to impose the austerity to workers no less ruthlessly than the Tories.

The union’s goal is to keep the conflict confined within the pro-employer labor relations system, which is designed to facilitate the enforcement of the demands of the corporate elite. Collective agreements for construction workers expire every three years at the end of April. However, Ontario labor law says workers only have the right to strike until June 15. After that, all outstanding contractual issues are referred to a government-appointed arbitrator.

Acknowledging the difficulty of convincing workers to vote for wage increases below inflation, Richard Lyll, president of the Home Builders’ Council of Ontario (RCCO), is already banking on binding arbitration.

Arbitration denies workers the right to strike or bargain collectively and even denies them the ability to vote on their terms of employment. Lyall, referring to the likelihood of deals being struck, remarked, “(S)they can’t, for whatever reason…the best thing to do is say, look, let’s just get back to work. We will submit this to arbitration.

Arbitration is increasingly being used as a tool to stifle working class opposition to rotten deals concocted by corporate management and their partners in the union bureaucracy. In March, arbitration was imposed on 3,000 CP Rail workers by the Teamsters union. In the same month, an impending strike by 16,000 college instructors was scuppered when the Ontario Public Service Employees Union referred its dispute to arbitration.

This record shows that if construction workers are to prevail in their struggle, they must urgently take control of the strike from the union bureaucrats. By creating rank-and-file strike committees, strikers can advance demands based on what workers need to live, not what construction bosses and union leaders consider “right.” This must include an immediate 30% wage increase to compensate for years of stagnant wages and runaway inflation.

The rank and file strike committee should fight to extend the strike to all construction workers in the province, including those who have been forced into illegitimate contracts by underhanded union tactics. They should also call on other sections of workers to join a mass movement for better wages, inflation-linked cost-of-living adjustments, and improved pensions and benefits. These urgent demands will only be met by a frontal assault against the domination of social and political life by the financial elite, including real estate speculators, and the reorganization of society along socialist lines.

A plan to meet construction hiring needs in central Minnesota