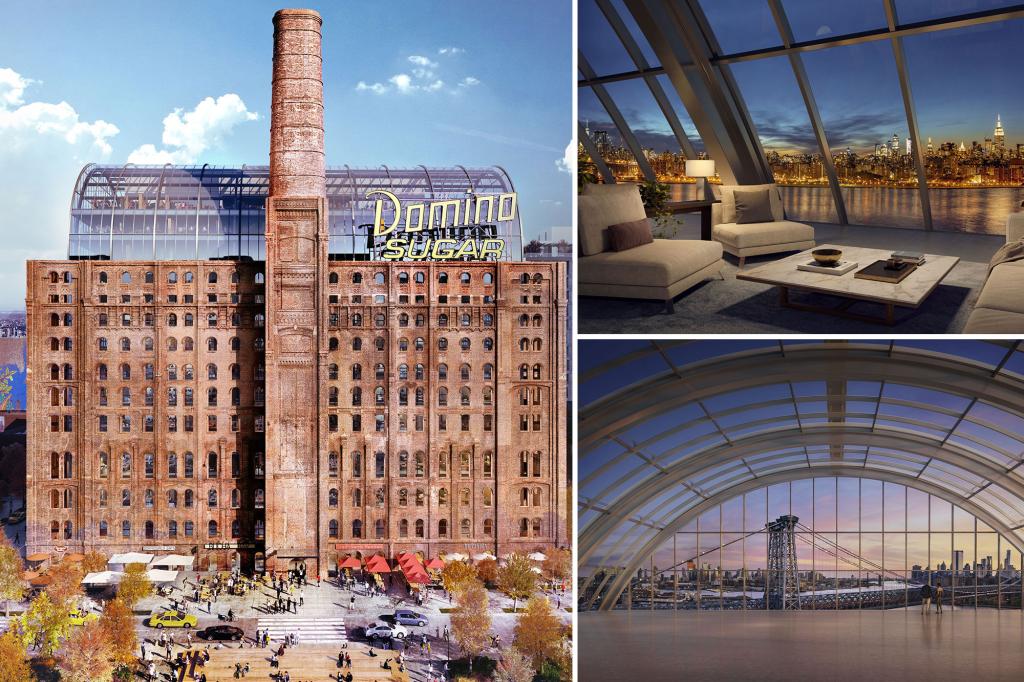 For six years, promoter Jed Walentas dreamed of turning sugar into gold on the Williamsburg waterfront. Now the moment of truth is at hand for the former Domino Sugar factory at 300 Kent Ave., a designated 1865 landmark that has been transformed behind its weathered brick facade into a one-of-a-kind office building.

The search begins this month to find tenants for developer Two Trees’ 460,000 square foot office building – a glass-encased building within the building that is the centerpiece of the $3 billion Domino site complex of Two Trees consisting of apartments, shops, offices and a popular park.

The refinery, as it is called, is unlike any other adaptive reuse in the city. The striking structure evokes a lost age of toil and sweat more viscerally than the routine conversions of downtown warehouses to offices.

When I first visited the place with Walentas in 2016, it was the scariest void I have ever seen. The work of generations past seemed buried in catacombs of pipes, beams, 30-foot-tall vats, and catwalks that ended in the air.

Sugar was refined there until Domino moved to Yonkers in 2004. But the industrial-age grunge remained. As Mary Ann Tighe, CEO of CBRE tristate, head of the office leasing team, recalled, “Your feet got stuck to the floor from the sugar residue. It was black and slushy and rancid.

Today, after a $250 million restoration and interior reimagining, nothing remains of the past except the 15-story brick facade and the large Domino sign. Taking the “cool factor” to a new level, the office building is inserted, like a ship in a bottle, inside the brick exterior, its glass wall perimeter set back 15 feet from the facade.

Walentas’ vision for the refinery reminded Tighe of a line from Alexander Pope: “Consult the genius of the place in everything,” she said, referring to architecture that “must fit logically into the character of his place”. (Tighe is surely the only negotiator who brings 18th-century poetry to the table.)

“What the Walentases do is make a neighborhood more of what it is intrinsically,” Tighe said. “This building could not exist anywhere else in New York than in Williamsburg.”

Natural light pours in through arched, church-shaped windows on mostly column-free floors ranging from 27,269 to 33,257 square feet with ceiling heights up to 14 feet. A verdant landscape of hanging vines, plantings, and 30-foot-tall sweetgum trees is being installed between the interior glass curtain wall and the exterior masonry.

Facilities will include a shared amenities floor with a fitness center, downstairs retail, a three-story atrium lobby, and operable windows — almost unheard of in a modern building. By next year, a 27,000 square foot glass-covered penthouse dome with spectacular river and skyline views will rise to the rooftop.

Asking rents are expected to range from $55 to $85 per square foot. Tighe noted that the site has no commercial rent tax and there is a tax benefit for businesses that leave Manhattan.

Walentas developed The Refinery entirely to specification, meaning without pre-signed tenants. I asked Tighe if even creative, tech-savvy tenants might hesitate to move into such an odd-looking structure in front of a 250-foot-tall, 150-year-old chimney. (Architecture is by Practice for Architecture and Urbanism and Dencityworks. James Corner Field Operations of High Line Fame is the landscape architect. Bonetti/Kozerski is credited with interior design.)

But Tighe said such a pioneering approach is typical of the Walentas family. Jed’s father, David Walentas, created the neighborhood now called DUMBO mostly on his own.

Like his father, “Jed has absolute clarity about what he wants,” Tighe said. “He can do it because he has no partners. His company only spends its own money.

“There’s no replica of Jed’s success if it’s a success,” Tighe said. “You can’t say, ‘Let’s build another refinery.’ ”